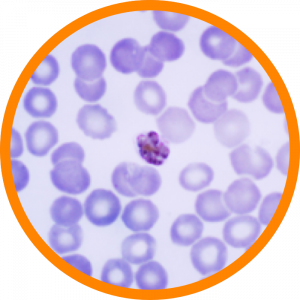 Malaria is transmitted by the bite of infected female Anopheles mosquitos (called "malaria vectors"), which introduces the organisms from its saliva into a person's circulatory system. Common symptoms include fevers, headaches, chills, and vomiting, which in severe cases can progress to coma or death if untreated.

Malaria is prevalent in tropical and subtropical regions in a broad band around the equator, including much of Sub-Saharan Africa, Asia, and the Americas.

The World Health Organization has estimated that in 2016, there were 216 million documented cases of malaria. That year, the estimated number of malaria deaths was 445,000, many of whom were children in Africa.

Cases of malaria around the world have increased greatly. Of great concern is the fact that the parasite is rapidly becoming resistant to the drugs used for its prevention and treatment.

Malaria is typically diagnosed by the microscopic examination of blood using blood films, or with antigen-based rapid diagnostic tests. Modern techniques that use the polymerase chain reaction, a technique that is used to replicate DNA sequence - to detect the parasite's DNA have also been developed, but these are not widely used in malaria-endemic areas due to their cost and complexity.