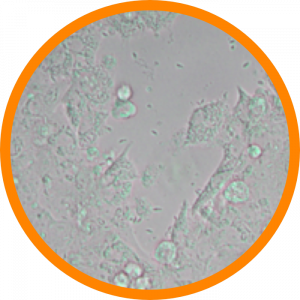 Neosporosis is one of the most common causes of bovine abortion, especially in intensively farmed cows. Neosporosis abortion also occurs in sheep, goats, water buffalo and South American camelids, although they may be less susceptible than cattle.

Both endemic and epidemic transmission patterns in cattle are positively associated with the presence and number of dogs in and around farms. Dogs are definitive hosts of N. caninum and are capable of shedding oocysts in feces after eating tissues of infected animals. Wild canids also are suspected to be, and coyotes have been confirmed as, definitive hosts.

Neospora oocysts have an impervious shell that enables survival in soil and water for prolonged periods after canine feces have decomposed. Intermediate hosts such as cattle become infected by ingesting oocysts. Cattle do not produce oocysts and thus do not transmit infections horizontally to other cattle, but latent infection endures permanently in their tissues and is transmitted to canids by carnivorism.