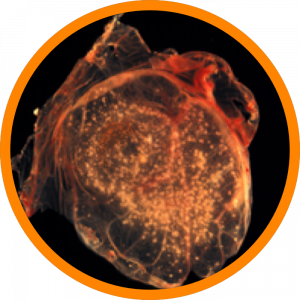 Smallpox is an infectious disease caused by the Variola virus, genus Orthopoxvirus. Other members of this genus that cause infection in humans are vaccinia virus, monkeypox virus, and cowpox virus. In 1980, the World Health Organization officially declared smallpox to be eradicated.

Vaccinia virus is the live-virus component of contemporary smallpox vaccines. Rarely, social contacts of people recently vaccinated for smallpox develop infections with vaccinia virus when their skin comes into contact with fluid from the inoculation lesion. Zoonotic infections via contact with infected animals with vaccinia-like viruses have been reported in Colombia, Brazil, and India.

Monkeypox is endemic in tropical forested regions of West and Central Africa, notably the Congo Basin. Rodents imported from West Africa were the source of a 2003 outbreak of human monkeypox in the United States.

Human infections with cowpox and cowpox-like viruses have been reported in Europe. Cowpox is transmitted through contact with infected animals; transmission between humans has not been observed.

Orthopoxvirus infection is confirmed by PCR or virus isolation. Treatment is mainly supportive, to include hydration, nutritional supplementation, and prevention of secondary infections.