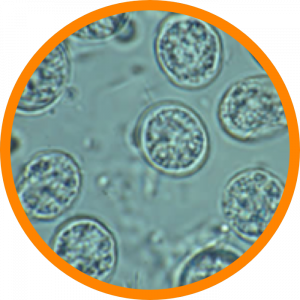 While Toxoplasma gondii, the parasite that causes Toxoplasmosis, infects most warm-blooded animals, the primary host is the felid (cat) family. Animals are infected by eating infected meat, by ingestion of feces of a cat that has itself recently been infected, and by transmission from mother to fetus.

Cats are the primary source of infection to human hosts, although contact with raw meat causes infection in some countries.

Up to a third of the world's human population is estimated to carry a Toxoplasma infection, but very few have symptoms because the immune system usually keeps the parasite from causing illness.

During the first few weeks after exposure, the infection typically causes a mild, flu-like illness or no illness. However, those with weakened immune systems, such as those with AIDS and pregnant women, may become seriously ill, and it can occasionally be fatal.

Toxoplasmosis is considered one of the Neglected Parasitic Infections, a group of five parasitic diseases that have been targeted by CDC for public health action.